Recent comments: jake polo said: hi everyoneAnonymous said: Where is 2014-2016 data?Anonymous said: Was Judith Butler paid millions of dollars?Bill Wilson said: Get this hothead outta here! Anonymous said: Ian dabney Miller admitted to attacking someone during the riots. He needs to be fired ASAP.Anonymous said: UC police, please arrest Ian Dabney Miller for assault and battery. He is the guy who bragged on Twi...Anonymous said: You are correct. In addition, sometimes their titles get changed inexplicably, and other issues, whi...rich rembisz said: anca , call me at 210 488 1443 rich rembisz from bucurestiAnonymous said: Thank you very much for providing this searchable database of public information. It is wonderful t...Anonymous said: Please join me in submitting your complaints to the government. just because something might be publ...

A Crisis of Priorities: Why Sacramento Is Not "The Problem"

We've all heard the line. UC PR always says something like: "We need to [pay workers less and make students pay more] because Sacramento cut our budget. You should complain to them, not us."

This is a lie.

The UC administration and regents should be a primary target of protest. Here I will demonstrate why.

(All data from this site and Changing Universities (the blog of UC-AFT President Bob Samuels; some text borrowed), unless otherwise noted. UC itself keeps changing some of these numbers, so I have kept to conservative estimates where necessary.)

None of these problems have much to do with Sacramento.

They have everything to do with an undemocratic structure that allows a few corporate-style "leaders" to steal UC from the public.

UC administration will say: "All the other money is restricted." But it's not. And there's a lot of it.

UC bylaws define a state of fiscal emergency as "an imminent and substantial deficiency in available University financial resources."

So ask yourself: Does this level of state funding cut really constitute a "fiscal emergency"? Does it require such dramatic hikes in tuition and pay cuts for even the lowest paid workers? We are talking about less than 3% of UC's budget, and far less than other available funds.

If not, well... There are other explanations.

The Truth Behind UC Administration

To paraphrase Noam Chomsky: If you're serious about truth, you don't pay attention to what people in positions of power say—you look at the record.

Recent and longstanding actions by the regents and the Office of the President demonstrate a clear set of priorities and management philosophy.

It is a corporate-style philosophy that seeks to destroy the very idea of public education.

That is a strong statement. Here is why I am comfortable saying it:

According to Bob Meister (President of the Council of UC Faculty Associations), in 2005 Gov. Schwarzenegger gave UC administrators "a green light to raise tuition as much as they thought necessary without the threat of cuts." Immediately, Meister says, UC "began using tuition as capital assets for projects." In other words, UC can borrow money based on the ability of students to take out loans. The higher the tuition, the more student loans, the more collateral, the more capital. Everybody wins! Well, everyone who matters...

The regents are raising fees for students because these increases have already been "securitized" and are necessary to provide collateral for loans, principally construction loans. The money was already spent BEFORE the increases were made!

And we're not talking about classrooms. Most of these construction projects have nothing to do with undergraduate instruction (list here).

While our "leaders" use the rapidly growing student loans of undergraduates to float billions in bonds for construction, they lend $200 million to the state, so the state can do some state construction and pay UC back with interest, to fund more construction projects, which have little or nothing to do with undergraduate education.

This just after a possible $800 million cut from the state supposedly requires UC management to raise tuition and cut salaries against their will.

UC spokesman Steve Montiel: "We're doing it because we're presented with a situation that called for some creative thinking."

Are you following this? Here's a sequence diagram:

UC administration says the threat (not even reality) of $800 million less from the state requires painful cuts to workers and horrible debt loads for students. But it's also a fine time to loan $200 million back to the state, with the guarantee that UC can later use it to build fancy research center buildings. They do not hesitate to lie/deceive.

Where is salary going? Increasingly, to the wealthy.

Which part of UC is expanding? The top, by far. 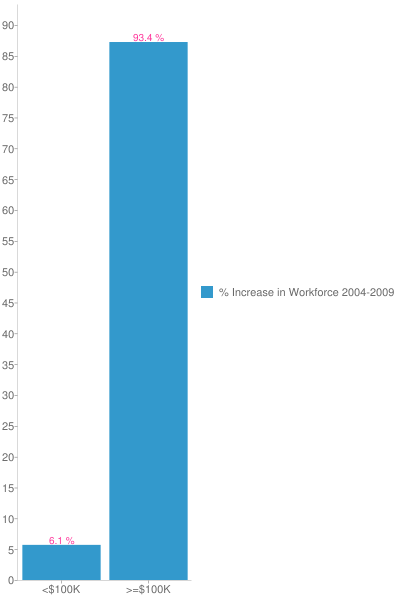 UC's compensation structure reflects the general movement of the U.S. economy: The rich get richer, the poor get poorer, and the middle class—well, it was nice while it lasted. This economic system is not the result of some inevitable set of laws; it is determined by priorities and choices.

I have proven that UC President Mark Yudof's pay cut/"furlough" program takes far too much from those at the bottom and far too little from those at the top. There is absolutely no good reason to take money from those who can least afford it.

Bob Samuels, AFSCME, myself and others have suggested many alternate fiscal solutions for UC, only to be consistently ignored.

Under the guise of "retaining top talent", most workers, all students and the public of California are being sacrificed for the benefit of a few people at the "top."

Whatever Students are Paying for, it Isn't Education (source)

UC administration will claim that we are suffering with 1990-level funding. As Bob Samuels has shown, since over 50% of the undergraduate student credit hours are now being generated by lecturers and grad students, and not by professors, the actual cost to educate a student has gone way down since 1990. Also, the UC has continued to expand class size to reduce educational costs.

During all this talk of "fiscal emergency", do you hear much about the $23 billion of investments that UC lost in the past two years?

UC's long-term investment management was outsourced in 2000. Charles Schwartz has shown that UC's long-term investments have been underperforming since 2000, compared to similar institutions. UC actually managed to underperform an underperforming economy. Meanwhile, Randolph Wedding is paid nearly half a million dollars per year to supervise the failure (along with many assistants, surely). One of those essential "top talents" that Mr. Yudof likes to mention.

UC followed the Yale model of investing heavily in toxic assets and in real estate. Now that the Yale model has failed, those who followed it are raising tuition, cutting classes, cutting faculty, cutting salaries, and increasing employee workload.

But is this a good excuse? The $23 billion is mostly in the pension fund, endowment short-term investments—a long-term problem. And the UC still has a ~$20 billion budget. As Bob Samuels noted in his Democracy Now! interview:

A closer look at the regents explains why.

The Regents are Royalty

Whether appointed by the Governor or regents by virtue of position, the Board of Regents is a collection of well-connected real-estate and media moguls, bank executives, defense contractors—in other words, profiteers. So what are they doing running a public university?

Here are some examples of regent priorities:

The backgrounds, actions and statements of UC regents belie the idea that they are acting in the public's interest.

"Soon every faculty member will have a personal senior manager"

In the UC system, we have a saying: "When two administrators walk into a room, three always walk out."

Charles Schwartz has shown that the rate of administrator growth at UC is higher than most public or private universities:

Anyone who says that Sacramento is "the problem" hasn't bothered to look at how UC is structured.

None of these problems have much to do with Sacramento.

They have everything to do with an undemocratic structure that allows a few corporate-style "leaders" to steal UC from the public.

[1] Nearly all of the shortfall has been made up for with stimulus funds and adjustments.
[2] One-third of fee hike revenue is supposed to be devoted to "financial aid."
[3] Though that number is suspiciously low and applies quite inequitably across the workforce.
[4] See http://www.universityofcalifornia.edu/news/article/21671.
[5] See http://www.sfgate.com/cgi-bin/article.cgi?f=/c/a/2009/08/06/BAGK1942B2.DTL.

All opinions expressed in comments are those of the posters, and not of this website or its owners.
New Page-Specific Comment
(Note: These comments are specific to individual pages/searches and are removable only by the site administrator.)
Name:

Salary data are identical to those from public records requests by the San Francisco Chronicle. The Chronicle described the 2005 data as follows, which probably applies to later data as well:

In addition to salaries, total pay includes overtime, bonuses, housing allowances, relocation allowances, administrative stipends, revenue sharing and more than a dozen other types of cash compensation. It does not include health or retirement benefits.

Results are the actual amounts paid to workers during the year, according to the UC system. Since this data looks back in time -- it has to for overtime to show up -- those who worked only part of the year will see their actual earnings for the year, not how much they will eventually make over 12 months. Gross pay includes overtime, bonuses, housing allowances, sick leave payout, vacation payout and multiple other forms of cash compensation. Some workers promoted toward the end of the year will see their old job titles listed here.

Unfortunately, some errors do exist, and have been acknowledged by UC:

Thank you for the information you supplied on possible errors in the way that earnings were summarized in the Calendar Year 2007 and 2008 UC salary data. We have looked at the program that was used for those years and have learned that earnings for employees with the exact same name at the same location were indeed added together under only one employee name and title. We have modified the program so that this will not occur when we produce the 2009 calendar year data. I appreciate your help in identifying this error and apologize for the inaccurate data that was provided.
- Karla Holmberg, Information Resources and Communications, UC Office of the President

You asked whether corrected versions of past systemwide earnings reports will be done. Because the public is most interested in recent earnings for current employees, and the error that you found affected less than 0.5 % of the employees in the report, corrected versions of past reports will not be done.
- Stella Ngai, Director, Public Records and Information, UC Office of the President

Some examples of the errors:

"Extra Pay" is the amount between base and gross, excluding overtime pay.

Data include employee pay that may not be affected by the proposed furlough plan (e.g. full federal grant).

*The following records have been omitted, in order not to include students and casual employees:

(All records are included at the moment, due to database issues.)

Please forgive the advertisements on this site. I only hope to recoup the cost of web hosting, not to make a profit.

This site was developed by Jeffrey Bergamini and is no way endorsed by, created by, or otherwise officially affiliated with the University of California. Please direct any correspondence to info@ucpay.globl.org.