Recent comments: jake polo said: hi everyoneAnonymous said: Where is 2014-2016 data?Anonymous said: Was Judith Butler paid millions of dollars?Bill Wilson said: Get this hothead outta here! Anonymous said: Ian dabney Miller admitted to attacking someone during the riots. He needs to be fired ASAP.Anonymous said: UC police, please arrest Ian Dabney Miller for assault and battery. He is the guy who bragged on Twi...Anonymous said: You are correct. In addition, sometimes their titles get changed inexplicably, and other issues, whi...rich rembisz said: anca , call me at 210 488 1443 rich rembisz from bucurestiAnonymous said: Thank you very much for providing this searchable database of public information. It is wonderful t...Anonymous said: Please join me in submitting your complaints to the government. just because something might be publ...

Dateline UC Davis published an article regarding the proposed temporary layoffs for union-represented employees. While this plan is almost certainly an illegal attempt to sidestep collective bargaining, and will probably never take effect, the details are nonetheless interesting.

The Dateline article includes a link to a chart detailing the number of employees involved. Using that chart, we can make a good estimate of the dollar amounts involved:

These proposed cuts seem to be nothing more than a thinly veiled attempt at union busting, using UC's standard lie of "shared sacrifice".

Using salary data from 2008, we can see that non-student salaries at UC Davis were roughly $1.4 billion total. That makes these cuts equivalent to less than one half of one percent of the campus' entire salary expenses. 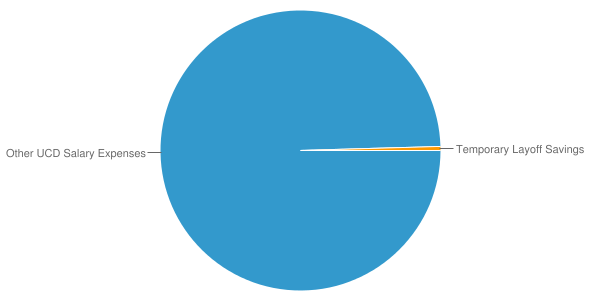 This begs the question: If the amount in question is so relatively small, why would UCD rush to unilaterally impose this rather than negotiate in good faith with the unions?

One likely explanation: UCD is trying to intimidate workers and make their unions look ineffective and powerless.

Hypothetical: How could $100K+ earners obtain the same savings?

$100K+ earners could take a 1.3% pay cut on average, or an extra 3 furlough days, to obtain the same budget savings as this temporary layoff plan.

And probably not a single one of them would lose their house, not eat, or not pay their bills as a result. Can we say the same about those targeted with the proposed layoffs?

All opinions expressed in comments are those of the posters, and not of this website or its owners.

New Page-Specific Comment
(Note: These comments are specific to individual pages/searches and are removable only by the site administrator.)
Name:

Salary data are identical to those from public records requests by the San Francisco Chronicle. The Chronicle described the 2005 data as follows, which probably applies to later data as well:

In addition to salaries, total pay includes overtime, bonuses, housing allowances, relocation allowances, administrative stipends, revenue sharing and more than a dozen other types of cash compensation. It does not include health or retirement benefits.

Results are the actual amounts paid to workers during the year, according to the UC system. Since this data looks back in time -- it has to for overtime to show up -- those who worked only part of the year will see their actual earnings for the year, not how much they will eventually make over 12 months. Gross pay includes overtime, bonuses, housing allowances, sick leave payout, vacation payout and multiple other forms of cash compensation. Some workers promoted toward the end of the year will see their old job titles listed here.

Unfortunately, some errors do exist, and have been acknowledged by UC:

Thank you for the information you supplied on possible errors in the way that earnings were summarized in the Calendar Year 2007 and 2008 UC salary data. We have looked at the program that was used for those years and have learned that earnings for employees with the exact same name at the same location were indeed added together under only one employee name and title. We have modified the program so that this will not occur when we produce the 2009 calendar year data. I appreciate your help in identifying this error and apologize for the inaccurate data that was provided.
- Karla Holmberg, Information Resources and Communications, UC Office of the President

You asked whether corrected versions of past systemwide earnings reports will be done. Because the public is most interested in recent earnings for current employees, and the error that you found affected less than 0.5 % of the employees in the report, corrected versions of past reports will not be done.
- Stella Ngai, Director, Public Records and Information, UC Office of the President

Some examples of the errors:

"Extra Pay" is the amount between base and gross, excluding overtime pay.

Data include employee pay that may not be affected by the proposed furlough plan (e.g. full federal grant).

*The following records have been omitted, in order not to include students and casual employees:

(All records are included at the moment, due to database issues.)

Please forgive the advertisements on this site. I only hope to recoup the cost of web hosting, not to make a profit.

This site was developed by Jeffrey Bergamini and is no way endorsed by, created by, or otherwise officially affiliated with the University of California. Please direct any correspondence to info@ucpay.globl.org.